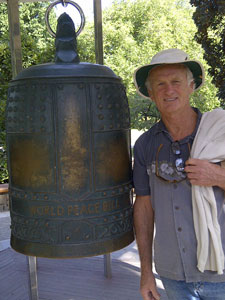 Buckley Smith, a self-taught artist, was born in Los Angeles in 1947 into a family of creative energy and three generations of Hollywood Art Directors. Fantasy and the certainty that one can do anything were honed at an early age. Today these qualities are what set Buck apart in the art world.

By his ability to touch something in us, Buckley helps us to see possibilities our imaginations have only toyed with. The other-worldliness and glimpses into a time past come from a place where only Buck has been, but that we can recognize as somewhere comfortably familiar. The apparent ease with which he can define the sheer of a boat or the muscle of a thigh erase that fine line between surrealism and realism. You simply want to be there and experience that place so alluringly illustrated in Buck’s work. 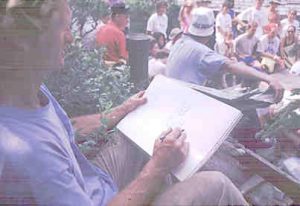 Drawing, be it pen and ink, graphite or charcoal, is Buck’s original medium, and remains his strongest today. The fair curve of a hull emerges naturally from these hands; hands that could easily have been those of a naval architect. Boats have remained his foremost subject matter.  Designing and building boats of all sizes and purposes had occupied Buck since his early twenties. As a child he had always wanted a boat and says, “building them was the one sure way to realize the dream!” Hand carved models, both fanciful and graceful, radio controlled pond boats, and full size working or sailing craft are all within his reach.

Over the years his art expanded into other mediums, as a matter of course.  Wood sculpture in two and three-dimensional form has become an extension of drawing, transforming the  work on paper into a form you can touch. Buck is an effective teacher in relaying the passion involved in taking the seed of an idea from its beginning through designing, drawing, then sculpting, carving or painting the image in full form.

Oil painting has been the most recent edition to mediums utilized, and Buck actually enjoys this one the most, using his painting time for relaxation and meditation.

Of late, Buck has been sharing his work with schools, as an Artist in Residence. Working one on one with students, Buck has an easy, confident manner, encouraging their abilities. He works with the children in the creation of a full size mural used as the stage backdrop should the Residency involve one of his musician colleagues.

Year after year Buck has been involved in The Sweet Chariot Music Festival in Swan’s Island, Maine as its art director and set designer, creating the “Living Mural” live on stage during the performances.

Buck travels internationally, creating custom murals as both private and corporate installations. Often, these take him to Europe, where he gathers inspiration from the architecture and peoples, returning with new pieces of art.

All in all, Buckley Smith literally lives his art. He has built boats and sailed them half way round the world, designed and built two homes for his family, and is constantly working on his art. He loves collaborating with other artists, and is always open to new ideas. A lover of life and people, Buck is a man who lives his dreams. 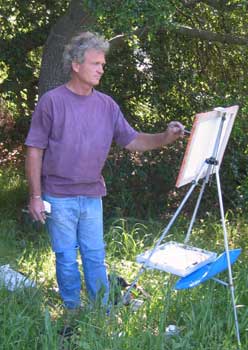 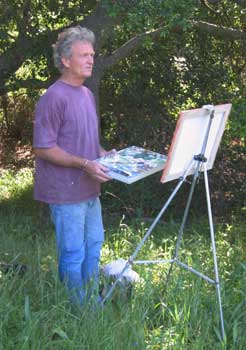 Buckley Smith, a native Southern Californian, has always had a passion for boats. His marine and fantasy art reflect his early love of wooden craft. At the age of eight he built his first model with his father, and at nineteen he began selling his pen and ink drawings of flying schooners and other sailing vessels while living in Hawaii. At twenty-four he built his own 32 ft. cutter, which he sailed half way around the world, supporting himself with his fantasy and marine art. 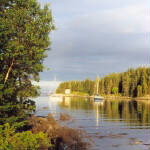 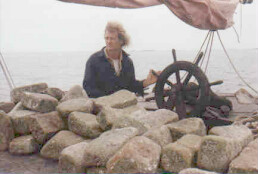 The quiet solitude of Penobscot Bay islands provides a simple yet elegant background for the creative efforts of distinguished Maine artist Buckley Smith.